Nigerian musician, David Adeleke, better known as Davido, has advised Nigerians to get their PVCs (Permanent Voter’s Card) ready ahead of the next general elections in 2023.

The Afro beat artist took to his Twitter page to say this after the President’s national broadcast on Thursday. The father of three who recently celebrated his son’s first birthday also stated that is hurt for this generation.

“EVERYBODY get your PVC READY #ItIsNotFinished”

“I’m so hurt for our generation”

The ‘Fem’ singer has been championing the #EndSARS movement via his official Twitter page since the beginning of protests. He has since reached out to state governors, the vice president, and the President via his Twitter handle.

See his tweets below: 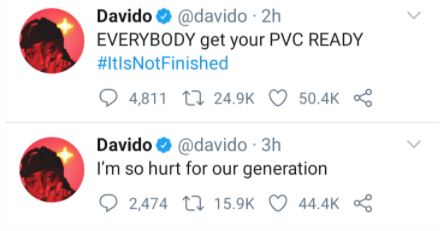 Hello Viewer, support 260vibes Global by making a DONATION to Us by Click on DONATION button, Nothing is too Small.